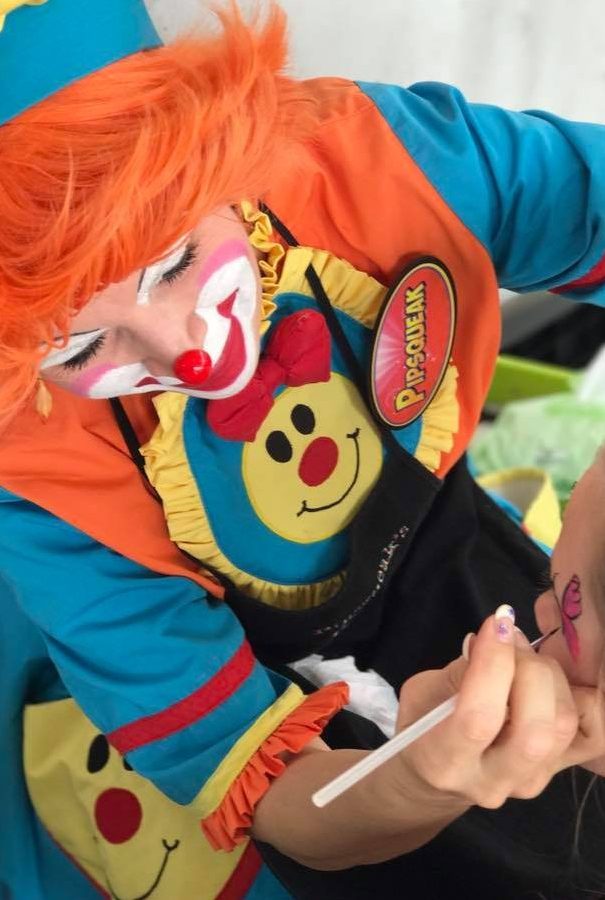 What age is ideal for a Pipsqueak Comedy Magic Show?

3-11, but most events include all ages. We cater the party to the age most represented. For example, kids under 4 don’t “get” all of the jokes or understand magic the way older kids do and have shorter attention spans. For them, we do a shorter show with less magic, simplified humor, and more puppets.

How much should a clown cost?

It depends on what you are looking for. You could hire your neighbor to wear that cheap clown getup he got from the Internet, put on bad makeup (which can be terrifying), and do a little amateur juggling for $0 – $100.

But is that actually what you want?

Do you really want a professional clown who just happens to have a degree in elementary education and decades of experience working with children who are shy, outgoing, and everything in between? Someone known for compassion, sensitivity, and genuine joy? Well then, you probably want Pipsqueak. Would you like a clown who travels nationally for training to become really excellent? Yeah, then you want Pipsqueak. Would you like a pro who has quality props and a clean, cute—not scary—appearance? Well, shucks, it sounds like you are looking for Pipsqueak.

What are hallmarks of a trustworthy clown?

What about shy children?

Pipsqueak is a little bitty clown. Don’t tell her, but she’s practically the same size as the kiddos. (The creepy clowns are usually big guys with amateur acts and bad makeup…they scare us, too!) She’s also very good at reading the room. Her approach with shy kids is to NEVER get in their face or come on strong. Instead, she plays shy, too. She’ll keep her distance and let the shy child come to her when they are ready. She encourages the adults NOT to push the child at all. Instead, she takes a very gentle approach. Shy children are able to sit in the back and watch the show at a distance until they feel comfortable. They see Pipsqueak interacting with their more outgoing friends, and they fall in love with her silly puppets. They want to join in on the magic. By the time the show is over, the shyest child has warmed up and most want to come closer to get a sticker or get their face painted. Winning the heart of the shy child is something Pipsqueak excels at. But who are we kidding? It’s not just the kids, right? Countless adults have told us, “I’m usually afraid of clowns, but I’m not afraid of Pipsqueak!”

What are some tips to make my party better?

You will find a lot of good information here: Party Planning.

How long does Pipsqueak spend on my birthday party?

Pipsqueak creates a personalized show tailored to your event based on the information sheet you send in with your contract. She confers with the puppets, who argue over which ones get to go and which have to stay home. (Puppets squabble. They just do.) She pulls the props that are carefully categorized on specific shelves that fill up TWO LARGE ROOMS in her house—seriously, you should see all of the crazy stuff she has in there! So many rubber chickens! She fills the prize bags and finds the right-sized “I’ve been clowning around with Pipsqueak” t-shirt for the birthday child. Then she practices the show—even if she’s done the routines a hundred times before, she still insists on practicing every routine in the show (cue grumbles from the lazy sidekicks) because she feels the importance of THIS event. She understands that THIS event is a big deal to the birthday child, the parents, and the people that have rearranged their schedule to be there. She wants to bring her “A” Game. Every. Single. Time.

On the day of the party, Pipsqueak plans two hours to get beautiful, an hour to pack the vehicle, 30 minutes to unpack the vehicle and get set up at your venue, 20 minutes to repack said vehicle to go home. Another hour to unpack the same (This is her least favorite part of the job!) and put it on those carefully labeled shelves according to that detailed inventory map so that she can find it again in the future. Add an hour to chisel off the makeup. Then she usually eats, because it’s been HOURS and she’s STARVING. After putting her big feet up and enjoying something delicious, she will do a debrief: Pull up your party details on the computer and write her reflections of how the party went. She will keep this on file so that the next time you hire her, she has that background information to make the second party even better than the first!

Where did Pipsqueak get those shoes?

Don’t be fooled by the cheap, flimsy clown shoes you find in Halloween costume shops. Real clown shoes are expensive! Pipsqueak’s were specially made by a master clown shoemaker—and let me tell you—making shoes like that is no small feat! (Get it?) Seriously, professional clowns spend a lot of time on their feet (walking long parades, performing, tromping all over the fairgrounds, etc.) and need good shoes that are comfortable, won’t cause back issues, and will last. Plus, they need plenty of toe room! If you’d like a pair, they only cost $595. But the guy who made them has retired, so you can’t get Spear’s shoes now unless you buy them secondhand. Maybe try the black market?

How did Laura get into clowning?

She lost a bet…just kidding! She used to teach kindergarten until she started having her own (five!) kids. She loves the way kids think and honestly enjoys hanging out with them! Even after she had her family, she continued teaching in Junior Church and Kids’ Clubs.

She was on a puppet team as a teenager and later found puppets to be effective tools for teaching. Kids will always remember lessons taught by a wacky puppet! While at a puppet convention (yes, that’s a thing!) she met a clown who taught a character lesson in a way that was creative and fun. Laura decided to try out a clown character when she had opportunity to participate in a church talent show. She’d never done anything like it before. Her daughter, Lacey, agreed to perform with her, provided she didn’t have to talk at all. Laura gave her a horn and told her she could just “squeak” instead of speak. Laura went as “Pip” and Lacey went as “Squeak.” It was a hit! People asked if she would perform for other occasions and…“Pipsqueak the Clown” went public in 2005. (Lacey became “Lacey Lou” and was her first sidekick. She’s the green-haired beauty you might see in our old pictures.)

Pipsqueak still uses her teaching background in her school and library shows, which are the perfect blend of fun and learning.

Clowns are human and sometimes there are things going on in their personal lives that are difficult: a personal loss, a physical issue, extreme weather, a plumbing problem! After so many years in the business, Pipsqueak has had her share of “life” that happens to land on performance day. None of that matters when she arrives at an event, though. Anything negative is pushed aside and she loses herself in the character. She will tell you that many times it feels like magic because when the red nose goes on, the problems temporarily disappear, and her only focus is on bringing happiness to the audience. She believes that one of the keys to a joyful life is forgetting about yourself and bringing joy to others.

Has Pipsqueak ever had an accident or been stopped by police in her getup?

No, thankfully! But she has had a flat tire; twice in 17 years! In both instances, some really nice people stopped to help a very embarrassed clown on the side of the road—and asked for a selfie afterward.

Has she ever been in a public (non-event) place in costume?

When she travels a long distance, she has to get out to refuel. That has gotten a few raised eyebrows! She sometimes goes through the fast-food drive-through for a cold drink after a long performance. Can you imagine the conversation when they get home? “Yeah, I was at work today when this clown drives up…”

Rarely, she has had to run in to the store to grab something on her way to a show. People want selfies with her and often “sneak” photos as well. Fortunately, she allows plenty of “cushion” time so that she can usually accommodate requests. She’s also delivered Comedy-Grams to people at all sorts of businesses. And then there was that time she went to the Department of Motor Vehicles just for fun. (People at the DMV need a reason to smile.)

What’s the most unusual event that Pipsqueak has ever done?

Hmmm, it’s hard to decide. She performed at a wedding reception in Lake Placid that had an old-time circus theme. She’s walked a parade in a downpour that nearly had her shoes performing like water skis. She did a “Back-to-Second-Grade” surprise birthday party for a 21-year-old college student that was a blast! She’s done a Comedy-Gram for an anniversary. She also did one for a young man that had surgery which made it impossible for him to talk or laugh out loud. THAT was a gift from a buddy with a real sense of humor!

Where does Pipsqueak get her outfits?

Mooseburger Originals in Wisconsin. They cater to clowns. The colors don’t fade, regardless of frequent washing and sun exposure. They design the outfits with care to fit even the “vertically-challenged” clown. They hire American workers and pay them a decent wage.

Has Pipsqueak’s nose ever fallen off?

Yikes! Yes. It’s not pretty, but it happens, usually in high temps and humidity.

Christine. She is a very patient and kind person who is called upon to do all manner of very strange things in her job. Every trick is played on her first. Every idea is bounced off her first. She has literally been called upon to toss spoons at her boss, lick fluff off a window, and glue keys to a board to make a… are you ready?… keyboard. (ba-dum-bum!) It’s not at all unusual for Christine to find notes on her desk that say things like, “Please make a dozen long-stemmed red noses.” or “Could you research how to yodel?” 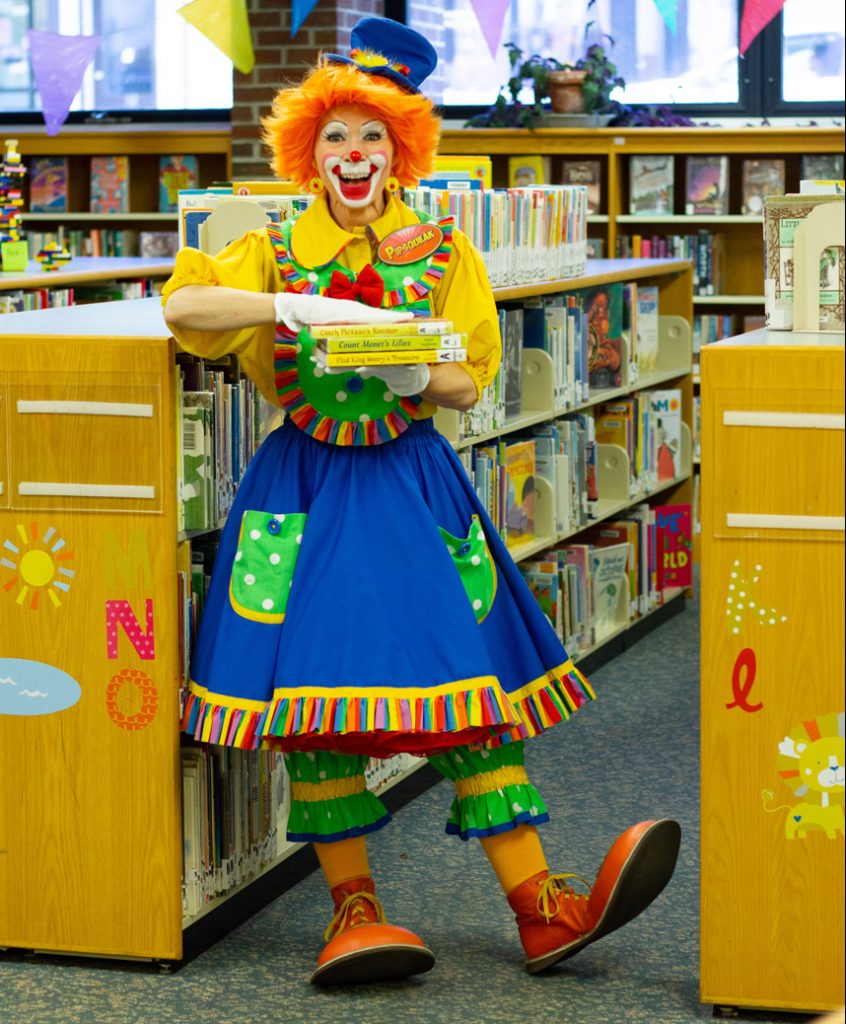